Automakers have spent the majority of 2016 announcing their plans for self-driving and the future of automation, but while some just begin to prototype systems, others are soaring ahead of the pack.

Research and advisory firm Lux Research has charted the 12 major automakers on business execution and technical value, and noted if the company has a positive or negative view on the advent of self-driving. 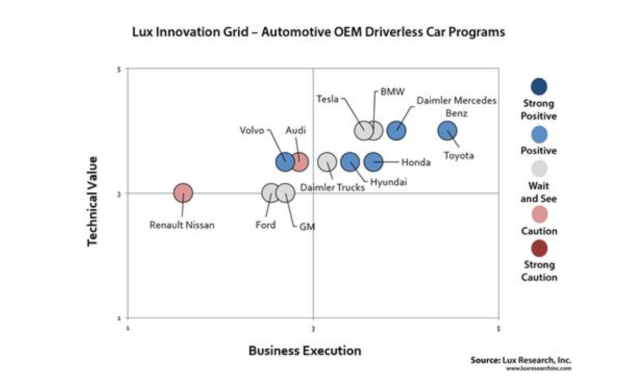 Toyota, Honda, and Mercedes Benz are ahead right now, as you can see in the graph above. Tesla and BMW aren’t far behind, but the report claims that the two companies have a “wait and see” attitude to self-driving, rather than actively pushing for its arrival. The attitude is based on investments, partnerships, and demonstrated capability.

The two major automakers in the U.S.—General Motors and Ford—have similarly poor outlooks. The two companies are lower than all European rivals on technical value and business execution, apart from Renault-Nissan, which is far behind the group.

General Motors has started spending heavily in the self-driving market, investing $500 million in a partnership with ridesharing app Lyft and purchasing Cruise Automation for $1 billion in March. Ford, on the other hand, may be looking to partner with Google to fix some of its self-driving shortcomings.

See Also: Can taxi drivers still have a place in a driverless world?

The PSA Group and Fiat Chrysler are both not on graph, despite both working on self-driving or partnering with tech companies. PSA Group, which controls Peugeot and Citroen, is currently the only firm allowed to test self-driving cars in France. Fiat Chrysler recentlypartnered with Google, providing them with 100 vans, and may have plans to create similar partnerships with Uber and Amazon.

While it is worrying to see companies like Renault-Nissan and Audi not invest in self-driving as much as rivals, we are still three years away from any concrete legislation that allows driverless cars on the road. That is enough time for any automaker to change their attitude towards self-driving.