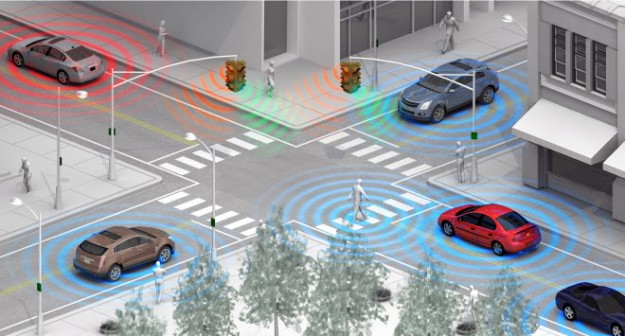 „There are plenty of airbags and restraints to keep occupants of most modern cars safe from injury during an accident, and more automakers are deploying driver assistance technology to keep collisions from occurring in the first place – even with pedestrians and others outside the vehicle. Volvo’s pedestrian detection system keeps walkers from inadvertently becoming hood ornaments, and the Swedish brand that’s synonymous with safety has even unveiled a pedestrian airbag.

By developing a system that alerts drivers to the presence of pedestrians, cyclists, road construction workers and others who have a high chance of coming in contact with a moving vehicle, General Motors hopes to reduce the 4,280 pedestrians and 618 bicyclists deaths caused by collisions with motor vehicles in 2010, according to National Highway Traffic Safety Administration. GM researchers are working on technology that will use the Wi-Fi Direct peer-to-peer wireless connection standard to allow smartphones and other connected devices to communicate with cars. Wi-Fi Direct would be integrated with existing driver-assistance systems that use sensor-based object detection to identify pedestrians and others carrying smartphones equipped with a Wi-Fi Direct app that the automaker is also developing.

According to the Wi-Fi Alliance, Wi-Fi Direct has an effective range of just over 200 yards, or roughly more than two football fields. And unlike the type of Wi-Fi you sponge off of at Starbucks, where each user connects to a central access point, Wi-Fi Direct is an ad-hoc network that allows device-to-device connection. “Seven to eight seconds is the amount of time it takes to connect to a Wi-Fi access point,” Donald Grimm, GM’s Global R&D senior researcher of perception and vehicle control systems, told Wired. And even more time if it has to authenticate the user by providing credentials. But with Wi-Fi Direct that time is reduced to one second, according to Grimm, for critical hit-or-miss applications like the one that GM is working on. GM also claims that Wi-Fi Direct has less latency than even cellular networks in order to quickly communicate between two parties on a collision course.

Cars would, of course, first need to be Wi-Fi connected, but that could happen very quickly, according toa report released this week by Strategy Analytics. “Wi-Fi is disrupting the automotive connectivity landscape,” writes the report’s author, Roger Lanctot. “Wi-Fi adoption in cars is rapidly enhancing automotive device connectivity options and applications. The speed, range and volume of data that can be transmitted via Wi-Fi will enable everything from higher quality content distribution in the car and enhanced vehicle diagnostics to inter-vehicle communication.” Lanctot told Wired that he predicts that applications of the latest Wi-Fi and Bluetooth chipsets on smartphones such as Samsung’s Galaxy line-up will prompt automakers to accelerate their in-car Wi-Fi plans, and adds that tier-on suppliers are gearing up to integrate Wi-Fi into automotive systems.

GM is also getting help in setting up a connected-car network from the federal government and by collaborating with its competitors in a pilot program that kicks off next month in Ann Arbor, Michigan to test vehicle-to-vehicle (V2V) and vehicle-to-infrastructure (V2I) communication. “The purpose of the pilot is to gather data on the potential benefits of V2V and V2I technology,” says Grimm. “From that data NHTSA will determine whether to mandate the technology or provide some incentives for car makers to deploy it.”

As for the timing of when pedestrians and others could rely on their smartphones to keep from getting mowed down by careless motorists, Grimm says, “We’re probably looking at five years out, or by the end of the decade. We see that we can extend these applications to include pedestrians, bicyclists and other roadside users.”

The automotive adoption of Wi-Fi Direct could also have side benefits. GM points out that the technology could be used to transfer digital music files or address book information between a home network and a vehicle’s infotainment or navigation system equipped with Wi-Fi Direct. And it could possibly replace Bluetooth as the primary means of device connection in the car – and the compatibility problemsassociated with it. “Wi-Fi Direct uses of the same data transport mechanism as Bluetooth,” GM’s Grimm adds. “And the way you connect to and discover devices is similar to Bluetooth.” Except with Wi-Fi it works more often than not.“