As foretold by the rumors, Apple announced two new larger iPhone models today: the iPhone 6 and iPhone 6 Plus. Sized at 4.7-inches and 5.5-inches respectively, the phones sport a slick new style and landmark new features.

Pre-orders start this Friday, September 12, and the phones go on sale Friday the 19th.

Both phones sport new designs. The iPhone 6 and 6 Plus, with their larger displays, now feel reminiscent of a miniature iPad. The rear of each device is smooth brushed anodized aluminum that curves softly into its glass front face rather than being completely flat on the back with largely squared-off edges—the look the past four iPhones adopted. On the front, you’ve also got the familiar Touch ID home button.

The iPhone 6 has a 1334×750 display, the 6 Plus 1920×1080 display. That’s over 1 million pixels on the iPhone 6 and over 2 million on the iPhone 6 plus. These new display sizes use a new generation of Retina display Apple is calling Retina HD. The new reengineered displays use ion-strengthened glass on top, and on the bottom, an ultrathin backlight. Even with the larger display, Apple is promising the iPhone 6 and iPhone 6 Plus will have equal or better battery life than the last generation of iPhones. 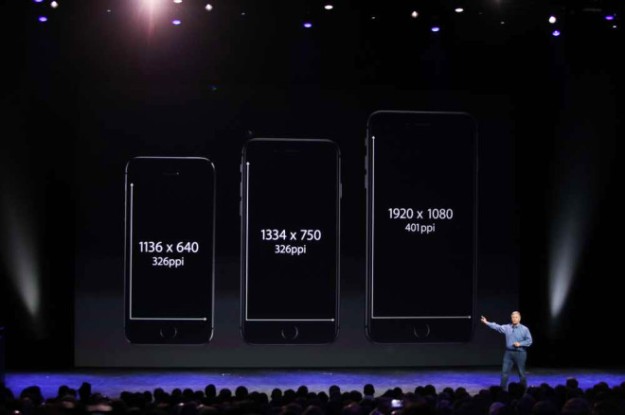 To use these big-screened phones, Apple’s introduced a few new software tricks to iOS. In the iPhone 6 Plus, the Messages app has a new horizontal split display. Stocks also has a two panel horizontal view, as does Mail. The keyboard takes advantage of the display area, too, and there’s a new horizontal homescreen view. These views obviously make better use of the increased screen real estate, but I wonder how easy it is to use with your fingers as you type.

You can also use swiping gestures for navigation in Mail, Messages, and Safari. There’s also a new gesture called reachability: If you double touch the home button, the display slides down so you can reach things at the top of the display without having to readjust your hand. This seems like a better solution than Samsung’s one-handed mode, but it’s still kind of awkward that it’s necessary.

Both phones will ship with iOS 8. Software updates will go out to older iPhones (the 4S and later) on September 17.

On the iPhone 6 line, Apple updated the camera hardware and software. Apple’s using a 8-megapixel camera with a f/2.2 aperture. There’s also a new sensor inside that’s an improvement over previous iPhone cameras, and a faster auto-focus. There’s the standard digital image stabilization at work in both phones, but in the bigger iPhone 6 Plus, there’s also an optical image stabilization system that uses the phone’s gyroscope and M8 processor to cancel out movements and shaking hands. Video is stabilized too, and there’s a new slow-mo mode that shoots at 240 fps.

Inside, a new A8 processor promises to keep things humming faster than any iPhone before, and the M8 chip has improved performance for motion-sensing and health-tracking. Working along side these updated processors is a new sensor: a barometer.