When Tim Cook took over as chief executive of Apple, it was a corporate transition unlike any other. He stepped out from the shadow of one of the best-known American CEOs and took the reins of one of the world’s biggest tech companies facing some uncertainty about how much more successful it could be.

Ten years into the job, Cook now leads the most valuable company in the world — technology or otherwise — and it remains among the most influential. More than a billion people worldwide use its devices and tens of millions of developers have built businesses on its software platforms.
Cook took over as CEO from Steve Jobs on August 24, 2011, less than two months before the Apple founder passed away. Since then, Apple’s (AAPL) market capitalization has grown around 600% to nearly $2.5 trillion, and its annual revenue has more than doubled.
If Jobs was known for his ability to create groundbreaking devices that redefined consumers‘ experience of technology, Cook may come to be known for expanding the Apple ecosystem — building a suite of subscription services and other hardware products that complement the core iPhone business Jobs launched.
Under Cook, Apple has gone from a premium device maker to a massive, multifaceted company with businesses ranging from payment services to an Oscar-nominated TV and film production studio. He’s overseen the acquisition of more than 100 companies, including the $3 billion Beats purchase in 2014 and the $1 billion acquisition of Intel’s smartphone modem business in 2019.
Inside Apple, Cook inherited a company culture known for being relentlessly demanding and he’s now managing at a time where tech workers have been increasingly vocal about social issues. (Cook himself, who in 2014 became one of the first leading CEOs to come out as gay, has been involved in LGBTQ+ rights advocacy.)
Cook has also been at the helm for major corporate missteps such as „Batterygate“ and allegations of poor labor conditions at its suppliers‘ factories. A recent announcement around a new child protection initiative also turned into an unexpected PR nightmare. And he has navigated a host of external threats to Apple’s business over the years, including, recently, feuds with the Trump administration, the US-China trade war and the Covid-19 pandemic.
What Cook hasn’t done is launch another product as successful and disruptive as the iPhone, but he’s found ways to keep Apple growing without that.
„It’s possibly the most successful handoff from strength to strength in corporate history,“ Mike Bailey, director of research at FBB Capital Partners, said of the transition from Jobs to Cook. „Apple, frankly, needed a cheerleader and a politician, possibly more than a micromanaging, stressed out founder.“
Bailey added: „You’re maintaining the empire, as opposed to building one.“

The growth of services

A month after taking over as CEO, Cook announced the launch of the iPhone 4S. Since then, Apple has released nearly two dozen more versions of the iPhone at a wider range of price points, along with new generations of the iPad, Mac and MacBook. Cook has also overseen the introduction of new hardware products — most successfully, the Apple Watch in 2015 and AirPods in 2016.
But even more important than the new devices brought to life under his leadership is the growth of Apple’s services business.
„From a hardware standpoint, I think you can make the argument that it’s been more iterative than revolutionary, but I think that diminishes his contribution to the company,“ said D.A. Davidson analyst Tom Forte, adding that Cook expanded the notion of what Apple is. „He said … ‚What can Apple be? Apple can be a music subscription service, Apple can be a fitness subscription service, Apple can be much more than the App Store.'“
Even in the first five years of his tenure, Apple was making meaningful revenue from its Services division, which included products such as iCloud, which launched in October 2011; Apple Podcasts, which launched in 2012; and Apple Music, which launched in 2015. In January 2016, Apple revealed for the first time that it had generated $20 billion in services sales in the previous year. 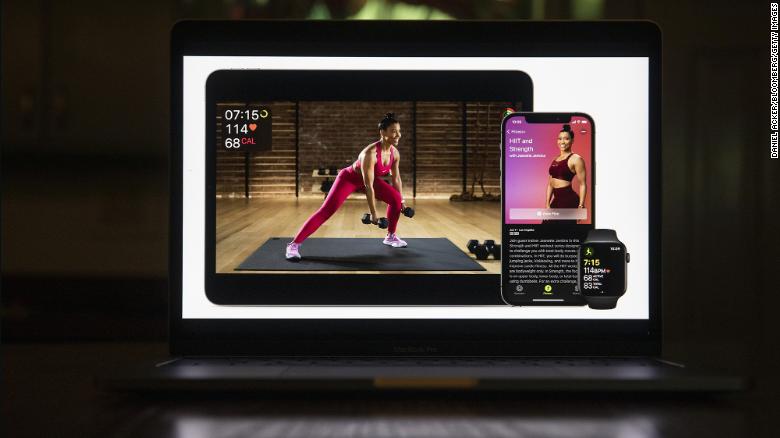 A central piece of Tim Cook’s strategy has been expanding Apple services such as Fitness+.
Since then, Apple has launched even more services, including Apple Arcade, Apple TV+ and Apple Fitness+, along with a subscription bundle, which have further boosted the business. In the 2020 fiscal year, Apple generated nearly $53.8 billion in services revenue, accounting for around 20% of the company’s total sales. (Apple doesn’t break out sales for individual services.)
Apple’s focus on services has allowed it to be less reliant on iPhone sales, which can be volatile from quarter to quarter and have begun to plateau, even dipping at times under Cook. A key focus for Cook has been offsetting that slowing iPhone growth.
„He kept the iPhone party going, but he solved a boom-bust problem by exploding their services business,“ FBB’s Bailey said.
Apple still brings in hoards of cash each year from iPhone sales. But now, it also has the more consistent, higher margin profits from subscription services to act as a buffer as customers hold onto their devices for longer. Services also give consumers yet more reasons to choose Apple hardware over others, and helps the company eke out more dollars from each person that buys one of its devices.

Cook has already said he doesn’t plan to be at Apple in another 10 years. But most followers of the company expect him to stick around for at least a few more.
In that time, he’ll have plenty on his plate that could shape the future of the company, including the long rumored release of an Apple car and AR glasses, as well as its continued efforts to build its own chips for its devices.
But he’ll also face major challenges, including Apple’s current antitrust fight with app developers and regulators. Forte also questioned whether Apple will be able to maintain its leadership position if the growth in internet of things devices means consumers become less reliant on smartphones. Apple has yet to gain the same traction in connected home devices as Amazon’s Alexa, and earlier this year killed off its original HomePod in favor of the cheaper mini version. 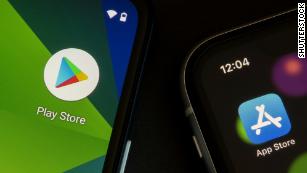 New bipartisan Senate bill takes aim at Apple and Google’s app store dominance
„An argument can be made that they’re [still] heavily dependent on the iPhone,“ Forte said. „I’m still trying to envision what the future looks like and what happens when the smartphone is no longer the center of the universe.“
Under Cook, Apple has also been working to address its impact on the environment, including plans to become carbon neutral by 2030. But given that the company is dependent on a complex global supply chain and non-renewable rare earth metals to build its products, Cook will likely have to push the company’s efforts further in the coming years, as climate change poses an increasingly existential threat.
Then there’s the question of who will take over leading the world’s biggest company when Cook does step down. Jeff Williams, Apple’s current chief operating officer, who has been dubbed Tim Cook’s Tim Cook in the tech press, would be an obvious choice if he were taking over now. But at just two years younger than Cook, that succession plan could be more questionable in even a few years, Bailey said.
„It doesn’t look like there’s another insider, number two, ready to go, so I do think that’s something Apple’s going to have to start to address over the next two years,“ he said.
Source: https://edition.cnn.com/2021/08/24/tech/tim-cook-apple-ceo-ten-years/
Werbung